Large scale deployments may have more than one resource server. Google’s services, for example, have dozens of resource servers, such as the Google Cloud platform, Google Maps, Google Drive, Youtube, Google+, and many others. Each of these resource servers are distinctly separate, but they all share the same authorization server. 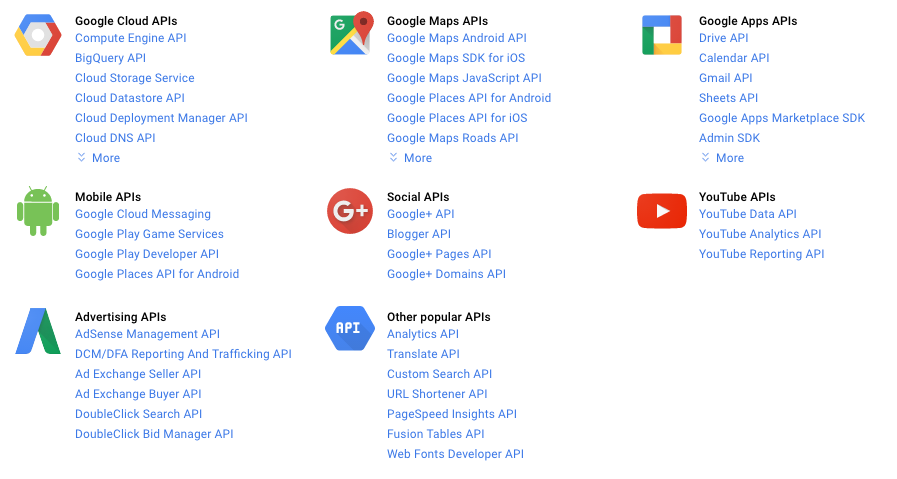 Some of Google’s APIs

Smaller deployments typically have only one resource server, and is often built as part of the same code base or same deployment as the authorization server.

If you’re using self-encoded access tokens, then verifying the tokens can be done entirely in the resource server without interacting with a database or external servers.

If your tokens are stored in a database, then verifying the token is simply a database lookup on the token table.

Another option is to use the Token Introspection spec to build an API to verify access tokens. This is a good way to handle verifying access tokens across a large number of resource servers, since it means you can encapsulate all of the logic of access tokens in a single server, exposing the information via an API to other parts of the system. The token introspection endpoint is intended to be used only internally, so you will want to protect it with some internal authorization, or only enable it on a server within the firewall of the system.

The resource server needs to know the list of scopes that are associated with the access token. The server is responsible for denying the request if the scopes in the access token do not include the required scope to perform the designated action.

The OAuth 2.0 spec does not define any scopes itself, nor is there a central registry of scopes. The list of scopes is up to the service to decide for itself. See Scope for more information.

If the access token does not allow access to the requested resource, or if there is no access token in the request, then the server must reply with an HTTP 401 response and include a WWW-Authenticate header in the response.

The minimum WWW-Authenticate header includes the string Bearer, indicating that a bearer token is required. The header can also indicate additional information such as a “realm” and “scope”. The “realm” value is used in the traditional HTTP authentication sense. The “scope” value allows the resource server to indicate the list of scopes required to access the resource, so the application can request the appropriate scope from the user when starting the authorization flow. The response should also include an appropriate “error” value depending on the type of error that occurred.

If the request does not have authentication, then no error code or other error information is necessary.